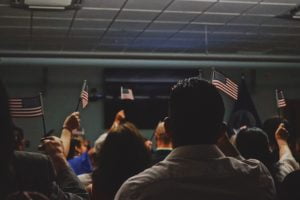 Green card holders may apply for naturalization to become U.S. citizens when they meet the requirements for citizenship. U.S. citizenship is a tremendous honor and privilege that allows naturalized individuals to become fully American.

Citizenship comes with many benefits, among which are the right to live in the United States permanently, to vote in federal elections, to serve on juries, to obtain a United States passport for international travel, to become a candidate for many elected offices, to obtain jobs and government contracts restricted to U.S. citizens, to petition for other relatives to immigrate to the U.S., and to pass U.S. citizenship on to their descendants. For many green card holders, obtaining U.S. citizenship carries the additional benefit of no longer having to deal with U.S. immigration authorities.

Generally, the requirements for naturalization as a U.S. citizen are: